The Coming Age of Technodelics 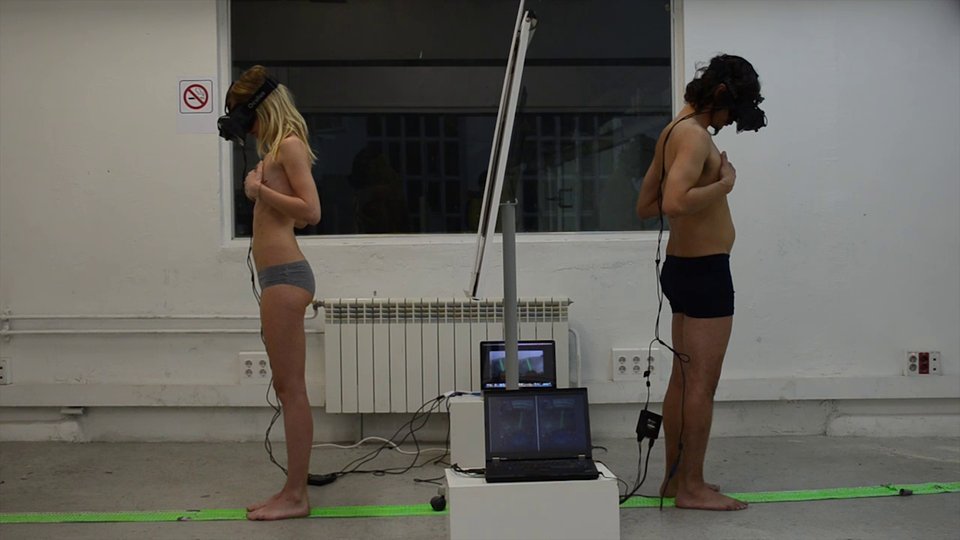 Last week Facebook bought Oculus VR, the company that’s been developing what many think is finally going to be the headset that brings VR mainstream. Oculus was already in a pretty exciting place, having raised $2,437,429 on kickstarter in 2012 and having secured John Carmack of id software fame as CTO. Facebook’s acquisition means they basically have unlimited resources behind them now. On top of that, Sony recently joined in the VR circus by announcing their own Project Morpheus headset for the PS4. Nearly two decades after the first wave of VR entered mainstream culture, phase two has clearly begun.

Now, this is thrilling for me, as someone who’s been heavily into video games, cinema, and transformative practices for the last 15 years. In my mind, we’re very close to seeing the full emergence of what I’m calling Technodelics (I’m sure others have used this term, I first starting thinking about it during my SHARE dialogues last year when discussing one unique application I imagined for an upcoming short film I wrote). VR, out of body experiences, trips, computers, altered states, the metaverse – there’s a bunch of terminology that’s been emerging in the last 50 years that while maybe not obvious at first glance, illustrates the many ways in which the psychedelic/consciousness culture of the late 60s intersects with the still massive and growing computer cultures of the 80s and 90s. David Pescovitz gives a great overview of how just how closely related these two worlds are in his talk Just Say Know: A Cyberdelic History of the Future, where he outlines how the bay area and silicon valley in specific were the petri dish in which these two worlds collided. He uses the world Cyberdelic a bit different than how I imagine technodelic will be used, but they’re certainly closely related and definitely check the video out as it’s a great primer on the history of the two subcultures.

By this time in 2014, I think it’s safe to say that most people have heard of psychedelics, which are drugs that when consumed can often create non-ordinary states of consciousness. They’ve been around for as long as we have, but really burst into mainstream awareness during the late 60s counter culture movement. Psychedelics, whether LSD, Salvia, Ayahuasca, Cannabis, or any of the many other countless variations, alter our consciousness by changing the ways our brains process sensory information. The world outside is the same, but our perception of it changes. This is what often gives them their transformative capacities and that can often times help people break free of old patterns and ways of experiencing the world. Right now there’s a small but growing re-emergence of studies that are exploring the potential powerful effects of Psychedelics; be it LSD for anxiety or MDMA for PTSD, and the many more to come. However, for all their greatness, one issue with psychedelics, (which might also be considered a feature depending on your perspective), is how uncontrollable/unpredictable they are. The environment you take them in, the people you’re surrounded by, the food you ate the day before, all these things can impact the experience of the altered state and sometimes lead to “bad trips” that have been so often parodied in mainstream entertainment.

Technodelics are something else entirely. For simplicities sake, let’s just say there’s two major variables to any human experience – the sensorimotor data we receive from the outside world, and how our brain processes and perceives it. Psychedelics work primary by distorting the latter – you and I could both be in the exact same room looking at the same painting and be seeing completely different things when under the influence of psychedelics. Technodelics on the other hand, will focus on the other side of the equation – the inputs. So from my point of view, Technodelics are simply anything that can cause altered states of consciousness solely by means of external stimulation. Psychedelic experiences happen because of something changing within, Technodelic experiences happen because of something changing without. 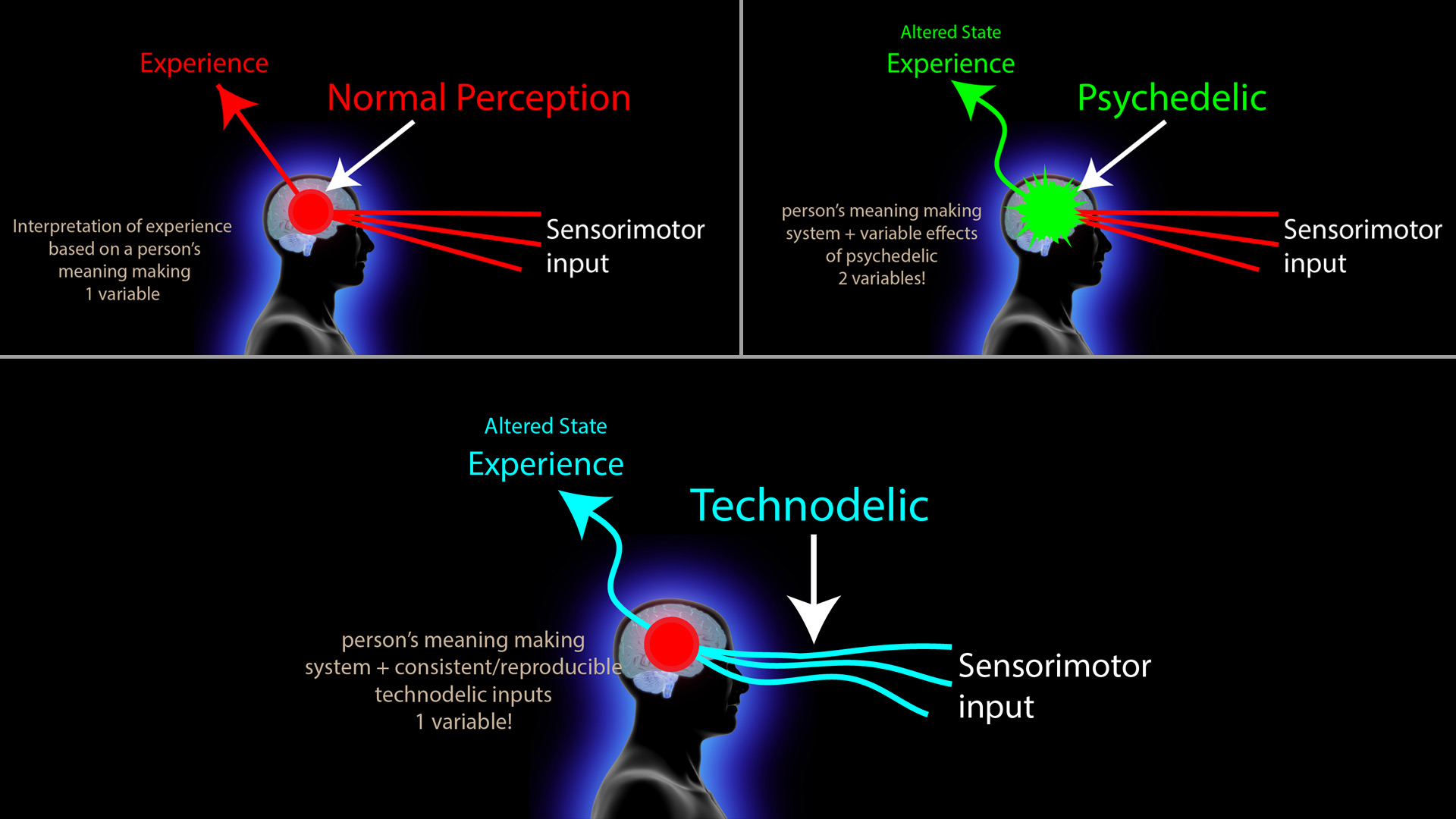 Using this definition, it becomes clear that like psychedelics, technodelics are actually nothing new. Most of what we consider “art” should be considered technodelia – paintings, writing, poetry, movies, music – at their most basic level these things all enter into our consciousness in the same way – via sensorimotor input. Many of the first “altered” state experiences I had came from these traditional media forms – seeing a rock concert live, the awe of seeing dinosaurs in Jurassic Park, and even Beullering out looking at A Sunday on La Grande Jatte at the Art Institute in Chicago. In fact, for almost as far back as we can see into history people have been using technodelics as a way to share their experiences with the generations after them.

So what’s all this have to do with the Oculus and VR?

As I was noting, Psychedelic experiences can be so divergent because they are so impacted by the environment we take them in, the effect the substance has on our brain chemistry, and different consciousness of the person doing the activity. Technodelics, however, theoretically can have far LESS variables, particularly when deployed in platforms like the Occulus. They can have the same container/deployment mechanism (vr headset) on top of the content itself be perfectly replicable. Whether music, books, or particularly movies, we’re already pretty good at programming content that elicits specific responses in users – but beyond headphones and movie theaters we’ve never really been able to have complete control of the environment that our technodelia was consumed in.

VR headsets change that, and become the standardized delivery mechanism for programmed experiences that can cause altered states of consciousness. Video games, movies, and most likely porn will be some of the first major “applications” for VR headsets, all with slants towards entertainment. Beyond that, however, I truly believe we’ll start to see those interested in exploring consciousness start to program specific sensorimotor programs and experiences that will be able to lead to more predictable altered states of consciousness. Experiments are already being done that allow people to swap bodies with someone else, which inevitably shakes up our very idea of “self”.

First oculus rift experience, and with 3d sound to boot. I'm hooked. This is going to be huge. #vrla

We know there is great power in empathy, or the ability to feel other’s experiences as if they were our own – and this new wave of VR technodelia is going to give us a platform for sharing entirely new types of experiences in completely safe and controlled ways. Jumping off a cliff, walking on mars, feeling what it’s like to be a different gender, or even wandering through a refugee camp exploring the aftermath of natural disasters – Technodelics give us a safe way to experience a multitude of things we might not otherwise. Those experiences are what I think are going to have profound impacts on humanity in ways we can’t quite yet predict.

As a filmmaker, the creation of replicable experiences is something I’ve already been interested in, and this oncoming way of technologies lights me up even more – they’re going to open the floodgates and expand the types of stories we can tell in ways never before possible.

So get ready, the technodelic age is upon us!

** Update **
Check out this fun interview I did with Vince Horn over @ Buddhist Geeks discussing the topic more in depth: