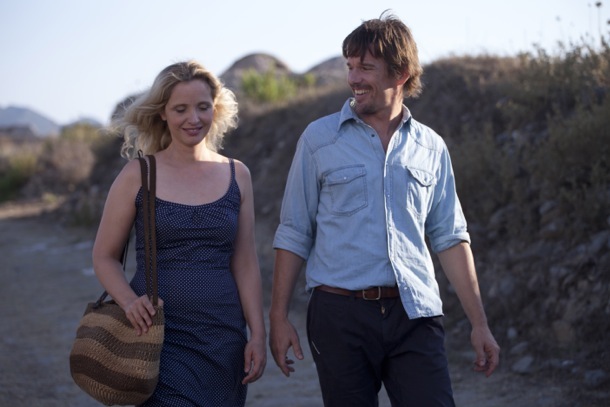 I had the pleasure of seeing Before Midnight earlier this week and absolutely loved it. I was a bit late to the series, not seeing Before Sunrise until 2005 just as the sequel Before Sunset was being released. I quickly fell in love with the films (particularly the second one) and needless to say was eagerly anticipating the latest installment.

I’m happy to say that it did not disappoint, though it wasn’t quite what I had expected. I’ll spoil nothing after the amazing and utterly perfect cliffhanger that ended Before Sunset, which played off two of the greatest lines of dialogue ever uttered in film. Needless to say Celine and Jesse are both alive and we get the joy of again spending some time with them together, and the culmination of that time ties back in very moving ways to the two films that came before. While just a short slice of their lives, the film gives a perfect crystalization of where they’re each at and what’s been happening for them – I instantly felt like I knew exactly what the last 9 years had been like in their worlds. The perfect ebb and flow of their conversations that started in Before Sunrise and was perfected in Before Sunset continues in Midnight, as beat to beat there’s always what’s being said and what’s actually being felt, which rarely but occasionally do line up.

My screening was followed by a fantastic Q&A with co-writer and director Richard Linklater, who’s been one of my favorite filmmakers for quite some time. The most fascinating thing I learned from his discussion was that basically none of the entire trilogy involved improv. In fact, they rather slavishly worked from scripts down to the specific word and gesture, which is no small feat considering the amount of long takes and full conversations that make up the films.

What strikes me most about the series is how it’s actually very specific while being absolutely universal at the same time. Every line of dialogue is in some shape or fashion born from the life experiences of the writers or people they knew, which in my mind has a lot to do with why things often feel so real. Oddly enough, it’s the very specificity of the moments, and the real feelings of vulnerability, trust, love, doubt, and love they explore that end up creating situations utterly universal in how they portray the various up and downs of relationship and the passing of time and growing old.

I’m not exactly sure what it is about this style that works so well for me (beyond the brilliant performances by Ethan Hawke and Julie Delpy), but think it has to do with that magic thing that happens when a practice has been done so deeply it simply begins to emerge in each moment. In the same way that someone in martial arts practices performing the most basic forms and moves over and over until the motions are built into the very fabric of their being, I think the process Linklater puts his actors through in this series does much the same. In his Q&A he talked about how he’d drive Ethan and Julie crazy forcing them to do each scene over and over and over again, until they simple knew it at such a deep level that they weren’t even acting anymore – no searching for the words, no awkward pauses, each sentence was just there. The epitome of practicing the form until it literally disappear – their performances seem utterly effortless and spontaneous even though that’s exactly NOT the case!

Now, beyond the extraordinary writing and performances themselves, I’ve been thinking a lot about the real “magic” of this series: time. Just as the meticulously scripted dialogue seems utterly natural and spontaneous on screen, and just as the incredible specificity of that dialogue and drama ends up being totally universal, I think there’s real magic in how the heightened and constricted time periods of these films represent the entire totality of the characters lives outside these vignettes.

Cinema itself is a sort of “heightened” time-space: roughly 2 hours of very specific individual moments linked together by carefully choosing which pieces to cut out in between. In my mind, the best of these cinematic narratives are also holographic, with each individual story often being a facsimile of the deepest and most important moments of our entire lives. The Before Trilogy is no exception, as each film ends up representing so much more then we see and is in fact a refraction of the time that’s happened in the years before and after each meet-up with Celine and Jesse. The intentional exploration and attempt to give perspective to both those gaps in time, and the heightened moments onscreen are really the core of what make this series so genius.

None of this is territory that hasn’t been already explored by other films – the joyful real time conversation of My Dinner With Andre (one of my all time favorites), the long wandering nights in Rome of La Dolce Vita, or even Bergman following up his exquisite Scenes from a Marriage nearly 32 years later with the sequel Saraband, but I think the Before series might be the first that does all of that explicitly and intentionally.  The series highlights the gaps of time that pass between films (9 actual years) for both the characters AND the viewers more than any other series so far. (save for UP documentary series).

Playing with the very real time that has passed in viewing audiences lives was once more or less solely the provence of television. Flashbacks, clip shows, season finales – the extended nature of multiple broadcast seasons had this built in, not always in an intentional way but still there none the less. The Cosby Show, Cheers, Seinfeld, and Friends all had fairly renowned last episodes that were as much a celebration of how long the shows had been part of our lives as they were some sort of actual completion to a dramatic narrative.  They were also very traditional episodic shows in the sense that they were all part of a broadcast era where one could never guarantee that a viewer had seen all the episodes – it wasn’t particularly easy for someone to catch up or see a show if they missed it and at best a show might hit syndication years after it’s original broadcast. Thus while some shows had some development over time the vast majority fell into the “something crazy happens but by the end of the episode everything is more or less back to where it started” narrative style or the completely self contained serials stories of shows like Law & Order.

By the early 2000s, however, this started to radically change. Multiple cable channels, DVD season box sets, online streaming, and even the king, bitorrent itself, meant a viewer never had to really miss an episode of their favorite shows, and multi episode narrative arcs (X-Files was definitely an early pioneer of this) started to become more and more prevalent in televised dramas. Plots became more complex,  time and events happen off screen, and the number of narrative threads and character arcs increased.  HBO particularly took up the torch in this regard, with Six Feet Under, OZ, The Wire, and The Sopranos taking multi character long arced narrative’s to an entire level. (Six Feet Under in particular struck me as one show where the writer’s really took advantage and played upon breaking the 4th wall and very consciously tapped into viewer’s senses of time in their own lives – driving the brilliant closing montage of the entire series.)

When reviewing La Dolce Vita for the second time for his Great Movie series, Roger Ebert rather poignantly said “Movies do not change, but their viewers do.”, referencing how his feelings towards the characters and situations of that brilliant film evolved and changed upon each additional viewing as he grew older and changed in his own life. The Before trilogy plays with that idea on multiple levels, as each film ties back into the previous ones in sometimes charming and often unexpected ways that actually deconstruct and question the very narratives we form for ourselves and whether people ever really do change.

When I first saw Before Sunrise and Before Sunset, I was immediately most drawn to the latter, and I think it’s precisely because of how intrinsically this passing of time is embedded into the continued story of Celine & Jesse. These films are built for repeat viewing after long stretches of time, as not only have the characters evolved and changed, but the actors and we the audience have as well. Watching the films and returning to them at various points in our lives reminds us, much like great songs or powerful smells often do, of both who we were and where we were at in our own lives when we viewed them in days gone past. That nostalgic re-watching / linking to our own history is the very same magic that I think causes us to so often stay deeply connected to the films, books, and music we’re exposed to in our early childhood years and adolescence. They have more meaning because they’ve been with us longer.

By purposefully taking their time in between the films (none of the sequels were ever really planned, but rather emerged when Linklater, Delpy, and Hawke all naturally felt they were in new phases of their lives) they’re able to cover and deal with new and different problems that really do only emerge with time. Consequently, just as a time-lapse let’s us appreciate and see patterns in the world we might not otherwise, the Before films act as time-capsules allow us to see the changes in not only the fictional characters on screen (both physically and emotionally), but in ourselves as well.

From the beginning, Richard Linklater’s films have played with these different vignettes of time: the last days of high school, the expansive time of dreams, and in what might be his most fascinating project, the upcoming film he’s been making on and off for the last 7 years following the life of a young both as he makes his way through elementary, middle and high school. Rather brilliantly he reportedly cast a young actor many years ago and began filming a story for a few days each year, so we’ll literally see both the character and actor growing up onscreen before our eyes in the context of his new dramatic tale.

Back to Celine and Jesse, I hope very dearly that I’ll get to grow old checking in with them every 9 years so, remembering how my very own life has unfolded each and everytime I watch them onscreen.

In relationships, people, and even movies themselves there is the dream and there is reality; in the cinematic magic that is the Before Trilogy those things truly become one and the same.

Do yourself a favor this Memorial Day weekend: grab a loved one and in night one walk the streets of Vienna in Before Sunrise, then in night two take an afternoon stroll through Paris in Before Sunset, and finally in night three head off to the theaters and spend a magical day on the Peloponnese peninsula in the south of Greece in Before Midnight. You’ll laugh, cry, curse at, and fall in love with one of the most endearing cinematic couples of all time.

And then, most important of all, do it again in a couple of years and while digesting the trilogy all over again take the time to remember that very magically weekend you saw all three films together.

← Prev: The Hobbit: 24FPS vs 48FPS & Other Problems... Next: Everything has changed, absolutely nothing's changed (Pearl Jam + Time = Magic) →