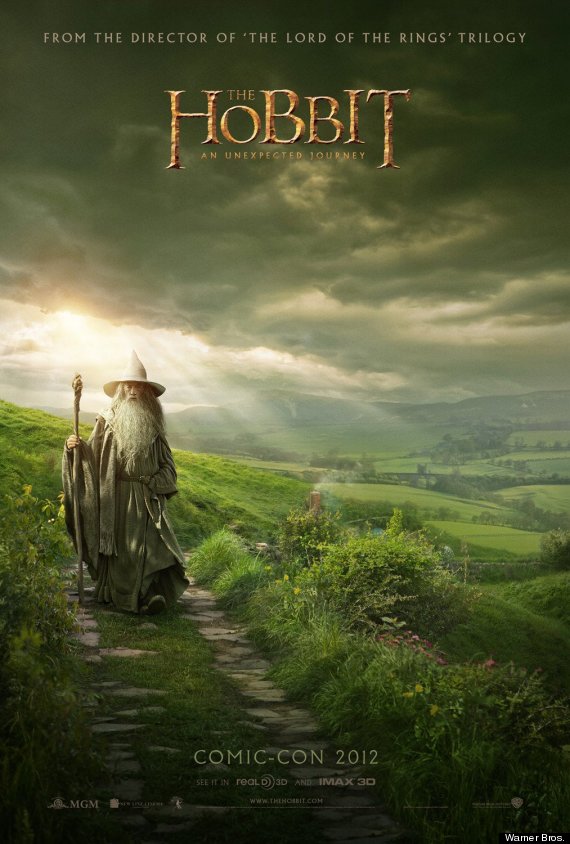 I saw The Hobbit this morning in 3D HFR in order to give Peter Jackson the benefit of the doubt and see it as he most intended it to be seen. Do I regret seeing it like that? No. Would I recommend it? No.

There’s a lot of problems with this film, only one of which is the HFR. Narratively, it’s a bit of a mess. I was wary when Peter Jackson announced his two films were becoming three. For LOTR, it made sense, three books, three movies! But to take the single book of the Hobbit and make it into three films? Absurd, I thought. And I was right. While Jackson is drawing on appendices and other writings of Tolkien to flesh out the three film arc, the simple problem remains that the material just isn’t really there, and not just lengthwise. The Hobbit is far more of a children’s book, and narratively the stakes just aren’t as high. Now, my biggest problem is how Jackson looks to be dealing with that. Instead of making a lighter hearted movie, he quickly attempts to start bringing in some of the stakes from the LOTR trilogy into this trilogy. It sort of works, but mostly doesn’t. The Hobbit just isn’t the same beast. Bilbo goes on his journey mostly by choice, and so he can have an adventure! Frodo, on the other hand, goes on his because there’s basically no one else that can do it! It’s against his will in fact, which is much more dramatic.  Trying to elevate the narrative of The Hobbit to the epic status of LOTR was a mistake.

Now, excessive problems aside, here’s the problem with the 3d and HFR in my mind. Off the bat, I’m neither a particularly against nor for 3d. Seeing AVATAR in 3D was one of my favorite cinematic experiences of all time, and I thoroughly enjoyed the 3D in Life of PI this year. But would I have been crushed if I hadn’t seen either movie like that? No, and the why of that has much to do with my feelings towards HFR.

In my mind the process of going to the movies is forgetting yourself, and identifying with the characters on screen. It’s a process of entering that world, not tjat world entering ours. The HFR 48 FPS of The Hobbit did not make it easier for me to go into middle earth. It felt more like middle earth coming into my life. The same applies to the 3d. If it’s failing to suck me “into” the world, it has become a barrier to me entering into the screen world. I felt that both the 3D and HFR in this case ended up being the latter: barriers to entry, never letting me forget that I was watching a movie. And without the forgetting, it’s much harder to be identifying.

That being said, I know my perspective is HEAVILY culturally influenced. EVERYONE that has grown up in the US since the advent of television has been culturally conditioned to associate 24FPS 35mm film with high quality, and 60i video to be television (more real in some senses). There’s nothing particularly special about 24 FPS other than it’s roughly the rate at which Persistence of Vision in the human eye works “well enough”.

So there’s a few things going on that make The Hobbit troublesome. First off, high frames rates immediately make us think of Soap Operas. The first hour of the Hobbit will be JARRING to you if you see it in HFR. The second hour and a half are much better, as Jackson has noted in interviews. Your brain will adjust to a great extent. But still, everything is BUTTERY smooth, which is just very different from the more dreamy motion of 24.

Now, on top of the 3D and HFR, there’s also the fact that these films were all shot 100% digital on RED Epic Cinema cameras. The LOTR, while in the end a digitally effects laden film, was still shot on traditional 35mm. The Hobbit has NONE of the subtle film grain of 35, and as good as RED Epics are, the highlights just look like terrible blown out video at 48 FPS.  Then on top of that all, to get 48 FPS the shutter angle of the camera has to be different, and shorter.  So there’s no blur on motion, the whole thing is like Saving Private Ryan which doesn’t benefit a FANTASY movie in my mind.  Fantasy isn’t supposed to be real, that’s why it’s fantasy.

So in the Hobbit we have CRYSTAL clear images moving with twice the smoothness of traditional film. There’s literally TWICE as much information coming into your eyeball every second, and the clarity of that information is sharp beyond 35mm, which in the end is the biggest problem.

While I have no facts to back it up, I’d be willing to bet that if you analyzed a human brain while it watches 24fps that it would be very different from one watching 48fps.  I think it’s because of the “just enough” nature of 24fps. Since there’s more blanks to be filled, I have a hunch that the brain actually has to do more “work” than when watching higher frame rates.  It’s more actively engaged even though film going is a passive process. During the action sequences, 48 FPS is actually too much information in my opinion. It’s a LOT of data to sort, so instead of my brain having to work harder, it just gets overwhelmed. Then, on top of that, there’s the 3d which is completely unnatural for the human eye (focusing on a single plane while tricking it into thinking there’s depth).  End result is that I never felt like I was in middle earth.

In summary, for me  the Hobbit in 3D HFR 48 attempts to bring the shire into my world, not me into the world of middle earth.  Go see it in 24fps non 3D.

← Prev: "The Death of Normal" / The Power of Perspectives Next: Before Midnight (Cinema + Time = Magic) →