Netflix, Big Data, and what hollywood is missing out on. 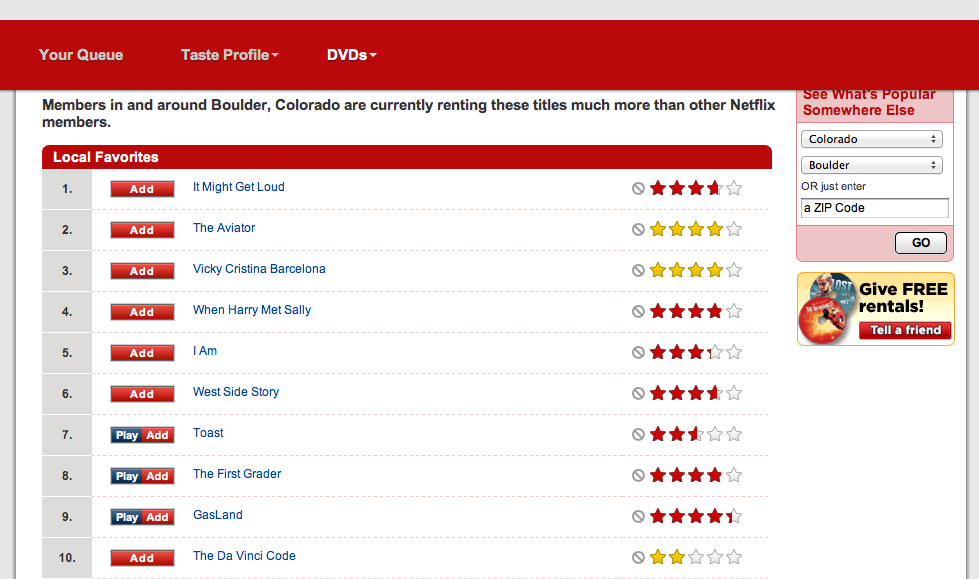 Sarandos says Netflix makes more “data-centric decisions” than most networks. He was able to analyze how many subscribers like the series’ star, Kevin Spacey, as well as how many rented the BBC series on which the new production is based. “You get a very addressable audience. Better than that, I know exactly who they are.”

That’s Netflix Chief Content Officer Ted Sarandos talking to his investors about one of the KEY advantages tech companies have over traditional media studios in the evolving film and television markets.

For a few years now I’ve been thinking that the real value of Netflix isn’t the content library per say, but the exhausting amount of specific data Netflix has on what its actual customers like and watch.  With one of the most famous recommendation algorithms around, Netflix has always encouraged users to rate movies since they first began shipping DVDs in the late 90s.  Since re-shifting their focus to streaming, they’ve also been able to collect even more default data – ie what shows and movies you started and whether or not you finished them, regardless of ratings.

As they shift into content production and with such vast knowledge of their users, Netflix can make FAR more intelligent and informed decisions about what to make than just about any company (save for Amazon) out there.  Compared to the traditional studios that have absolutely no feedback loops with their customers other than tickets sold and DVDs rented, Netflix is years ahead of the curve.  When Netflix now chooses to make a show or movie, they don’t have to GUESS what their customers want and don’t have to base their decisions off the hunch of programming executives.  Instead, they can see, DOWN TO THE ZIPCODE, what genre of shows and starring what actors their customers are already watching.  If they see that 10% of their customers devour Arrested Development’s 2 seasons in their entirety, it’s a no brainer for them to make season 3 – and at a budget that takes into account the actual numbers they can expect to see.

When I compare this to Warner Bros, Disney, Paramount, Sony, Universal, and the rest, it seems to me they’re in big trouble.  The single biggest cost for most “big hollywood” movies these days is marketing, sometimes hundreds of millions of dollars for movies, and there’s little to NO actual data for how much a difference all those ads make.  They can pour all the money they want into Dark Shadows, Battleship, or John Carter – and if audiences aren’t interested they FLOP.

The traditional studios are at a MAJOR disadvantage on this technological side, mostly because they’ve resisted the transition to digital delivery for so long, meaning outside companies like Apple, Netflix, and Amazon have been able to gain a significant foothold in the emerging market.  They’ve built an infrastructure that can connect the data of what people are watching with the teams that are deciding what is being made.  While Ultraviolet was a bold attempt to reclaim some of this lost ground, it’s frankly just too little, too late.  As Amazon and Netflix continue their march towards original content creation, I’d suggest the studios find a way to partner up – and fast.

And if I was Netflix right now?  Embrace your opposite – I’d open a series of small cinema cafes in all the major cities to act as communal centers for cinema lovers.  I’d constantly be programming a diverse selection of screenings of classics, second runs, and indie movies that draw SPECIFICALLY from what the customers in that zip code like.  Got an abundance of people that LOVE Firefly living in Chicago…screen the whole series over the course of a month!  Have a coffee shop / bar attached so people stay and chat afterwards, and hang out to talk cinema there even when they aren’t see a movie.  Cinemaphiles LOVE going to the movies.  A home theater system still cannot replace the value of an audience sitting in a dark room together, seeing a picture projected larger then life.  Fill up all those empty Borders and Circuit City stores and bring some culture and art back to communities.  You’ve got the DATA to pretty much guarantee a healthy crowd at ANY screening in any major city, USE IT!  I’d go!

← Prev: The Grey Next: "The Death of Normal" / The Power of Perspectives →