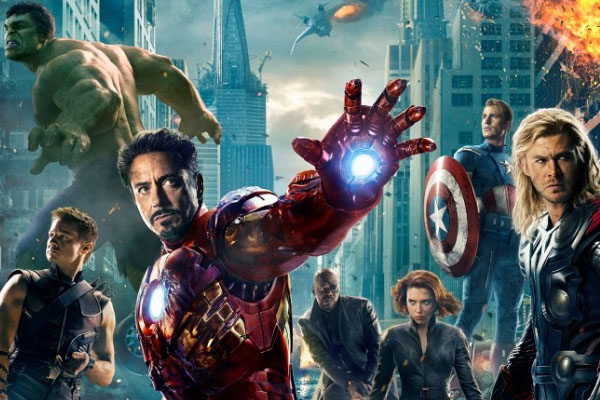 We’re now 12 years into the Super Hero resurgence in cinema. Roughly starting back with Bryan Singer’s 2000 Xmen and continuing strong this summer with The Avengers, The Amazing Spiderman, and The Dark Knight Rises, it’s clear the super hero saturation many predicted isn’t really going anywhere. Having crushed just about every box office record so far, it’s clear people love The Avengers. I myself did, and found it to be one of the most entertaining “summer” movies I’ve seen in years.

What is it about these films that fascinates so many? Obviously there’s the economics of the films, adapting properties based on long standing comic series means there’s already a prebuilt audience the material, so no matter how poorly the films are made someone will show up to see them.

What’s fascinating for me, however, is what the genre allows for narratively so much more explicitly than other films. It’s often said that comic books have in some ways become the “myths” of our times, and in many ways I believe they are. Telling stories full of moral lessons, challenge, and teeming with metaphors about personality, society, psychology, and so on, which is very fertile territory for telling action packed dramatic stories that are perfect for the cinematic big screen.

More specifically, the super hero genre does one thing in specific I find particularly fascinating, which involves the relationship between interiors and exteriors, or in Ken Wilber’s integral speak, the left hand quadrants and the right hand quadrants. In brief, I’d argue that basically all the most critically (and audience) acclaimed super hero movies manage to do one thing, and that’s to use the “super” hero power to eliminate “exteriors” from being main challenge/sticking point for the hero.

What on earth do I mean? Basically than in a world of normal people, the super hero emerges with a trait, skill, or ability and makes him nearly untouchable by the ordinary. Superman, the green lantern, ironman, the xmen, the hulk, spiderman….all down the line the super hero is basically no longer in danger from common threats and life and death situations. That’s what makes them super! Nearly every origin story across the line delves into this at some point, as our super hero is mastering/learning his or her powers, we get to seem them basically completely owning any threat that come their way.

This mastery is invetibly folowed by the emergence and presencing of the super villain. The hero, having gained this extraordinary power, needs to struggle in some way or another to make the movie interesting. What’s the best way to make a hero struggle? Make them face off against someone that is as powerful, or particularly more powerful than them, the “bigger suit” as my friend likes to call it. Bigger Suit also sometimes manifests as Multiple Suits as well, so instead of one bady, we can to see the protangonist facing off against tons of them.

As soon as the bigger suit has emerged, the brillance (and conservatism) of most super hero movies immediately emerges. The story is no longer one about exteriors, and instead shifts to being a story of interiors. Our protagonist is no longer SUPER because of his or her power, as the villain either matches/exceeds that power or has found a way to nullify it. What now makes our hero super is their INTERIORS: character, will, and ability to endure suffering. The best super hero movies, (and arguably many of the best action movies), invetibly hit that “interior will” shot, our protagonist is using every power she or he has, and it’s not enough. Whether locked in a physical confrontation, mental/psychic one, or magical/energetic one, our character’s external powers have met their match and all hope seems to be lost. Then bam, the magical happens. It turns out that what our hero has that the villain doesn’t is an internal trait, not and external one. Something worth fighting for, love for another, care for their country, whatever it is our hero has nearly been destroyed but then battered and beated, and often screaming in the process, our hero gets in touch with that interior trait and turns the tide. Batman, it turns out, is particularly fascinating because he is solely a hero of will, he has zero super powers and is driven entirely off the sheer power of his will and discipline to be exceptional.

This “interior power” or will, comes from what’s called the Upper Left quadrant in integral speak, and is deeply tied with what tends to dominate conservatism in the US: the belief that a persons achievements in life comes from their internal discpline and will, not their external circumstances. In fact, it’s also a very core strain of americanism itself, the belief that anyone can go from “rags to riches” with another perservance and hard work. Narrative struggles that deal with interior states, IE, self doubt, worry, or any thoughts or beliefs that occur within someone that can’t be seen on the outside, are often tough to both off cinematically. Interiors are traditionally the territory dominated by novels and traditional stories, as in that medium we’re able to dive into our characters heads and read and know their thoughts first hand. Movies, however, are an artform of exteriors. Outside of flashbacks, dream sequences, and usually cheesy voice over, we never really have access to a characters inner thoughts, thus often making it harder to tell tales where interior shifts are the main plot points. The super hero genre someone cuts around this problem, by using the “super power” as an external signifying for the internal states. Superman punches harder, Cyclops lasers stronger, and the hulk smashes more as their interior state changes. Their outsides are powered by their insides quite simply. Captain America may have been injected with a super serum, but that’s not what makes him super. His determinism, optimism, and sheer refusal to give up are what make him extraodinary and what really give his powers their power. (sadly a concept that wasn’t really explored enough in the feature film, one of the main reason I thought it failed cinematically). In spiderman speak, the entire heroes philosphy is boiled down to “with great power comes great responsiblity”, a responsiblity that only those with strong willed and virtous interiors can harness. One of my few gripes with The Avengers in fact mainly revolves around the lack of a satisfying “all hope is lost” moment for the team. They’re never really in threat of losing except for a very short sequence in which iron man is overwhelmed, the hulk is pummeled by aircraft artillery, hawkeye runs out of arrows, and thor/captain america just stop fighting for a moment. The interior shift moment gets almost entirely transplanting onto Iron Man, as he finally embodies Captain America’s finest interior quality and decides to stop the nuke knowing very well it’ll likely end his life.

On another note, another fascinating example of interiors and exteriors as explored by super heros also came out of The Avengers. I’ve always been a Hulk fan, and gew up watching the show and often obsessing over the character. Consequently I was thrilled to see how damn right they finally got him in his third movie appearance in 9 years. What I found particularly fascinating was the way in which I think Joss Whedon interpreted the character. Traditionally, the hulk has manifested whenever Bruce Banner loses his temper, or control. He gets angry and destroys everything around him, and was pretty much the case in the previous films. The Avengers, however, started playing with this trope early on, as we see Bruce taunting the Black Widow with his faux anger when she comes to recruit him, and he has a general sense of humour about his entire situation when he’s on the SHIELD Aircraft.

*SPOILERS*
Now, while it didn’t translate perfectly to the screen, it’s clear that as soon as we meet Bruce he’s more or less learned to control his outbreaks to a certain degree. Loki charms him on the ship using the staffs powers, which apparently explains his uncontrollable rage outbreak on the carrier.

What I find fascinating about Whedon’s interpretation of the character is his move away from Banner “controlling” his anger. We here plenty of jokes from other heroes guessing how Bruce is keeping a “level” head, be it pilates, bags of weed, meditation, etc etc…all things in pop culture that are generally seen as ways to avoid anger. Whedon, however, explores entirely original hulk material in my opinion by going the OTHER way…instead of making it so Bruce is avoiding his anger, we later learn he’s able to control the hulk because he’s “always angry”. Now, off that bat that doesn’t make too much sense, but when read next to the scene betwen Tony Stark and Bruce Banner and Tony’s admission that his defective heart is actually the source of his armor, and interesting take on the hulk begins to emerge. The Hulk itself is Bruce Banners ARMOR, it’s what protects him. In which case, the entire idea of the hulk is shifted from being something to avoid, but to something that Banner can embrace. As many great teachers of spirtual wisdom can attest, (Robert August Masters being my favorite), there’s actually a stark difference between ANGER and AGRESSION. Anger itself is nothing but emotional energy, almost always released when one feels threatened or in danger, be in physically, emotionally, or even spirtually. In many senses, anger is simply a BOUNDRY, a construct around our ego to keep us safe. When we feel threated, we feel the energy of “anger”, alarming us to wake up to the moment and be conscious of what’s happening.

Aggression, on the other hand, is the destructive external manifestation of anger, most often involving lashing out on others. Anger, simply is, it’s not a choice, agression, on the other hand, is reactive choice to anger. We can’t choose not to be angry, but we can choose not to be agressive, which is exactly what I think Whedon NAILS in this version of the hulk. Whedon’s already on the record saying they had to cut Bruce Banner’s “aha” moment that he has after crashing into the building and before going to New York. Now, I can only guess as to what it was, but I would like to think based on the above clues that Bruce realized the more he EMBRACED the Hulk, and appreciated the fact this creature was in fact his armor than shows up when he’s in danger, the more he could control it. Instead of fighting against the Hulk (an act of agression), he could simply realize the Hulk is just a boundary, and manifests when Banner is threatened. By embracing his anger / Hulk, Banner can remain conscious enough to not be aggressive.

Now I don’t know about you, but for me it was simply AMAZING to see a mainstream popcorn movie based on 60 year old comics tackle as deep a concept as the difference between ANGER and AGRESSION using the metaphor of the hulk is pretty damned amazing. For me this is where real conscious filmmaking is at. For those that want to see it, the deeper layers are there. For those that don’t, they get to see HULK SMASH, and that’s a win for everyone.